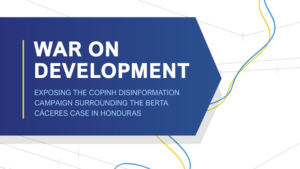 The following press release was distributed to media today.

WASHINGTON, DC 15 November 2018 – The ongoing prosecution of two businessmen accused of involvement in the 2016 killing of activist Berta Cáceres is based on false claims, riddled with procedural failings, and driven by a political pressure campaign, argues a new white paper published by Amsterdam & Partners LLP.

The white paper, entitled “War on Development,” is based on a review of thousands of pages of evidence and digital forensic data, containing alarming revelations regarding the events of 2016 and the conduct of Cáceres’ former organization, the Consejo Cívico de Organizaciones Populares e Indígenas de Honduras (COPINH). These facts presented in the white paper contradict many of the presumed narratives reported by media and non-governmental organizations with regard to this case.

“Evidence uncovered by expert witnesses shows how these activists have sought to manipulate public opinion, resulting not only in the cancellation of the hydroelectric project and the jailing of two innocent executives, but also in a nationwide freeze on most infrastructure projects,” said Robert Amsterdam of Amsterdam and Partners LLP, which represents Desarrollos Energéticos S.A. (DESA).

“With more than 1,500 jobs lost on this project alone, and a quarter billion dollars of investment in other projects frozen, if anyone is still wondering why caravans of migrants are leaving Honduras they should take a second look at the facts in this case,” says Amsterdam.

Featuring lengthy transcripts of chat messages recovered from phones and devices of the victim and accused, “War on Development” addresses the fundamental lack of evidence against DESA executives Sergio Rodriguez Orellana and Roberto David Castillo, who both have languished in pretrial detention for an extended period.

The paper also details the history of the Agua Zarca project and its compliance with social responsibility standards, featuring exclusive witness testimony from numerous members of the indigenous communities near the project site. These interviews not only show ongoing support for the project, but also harrowing accounts of acts of violence and intimidation allegedly perpetrated by persons associated with COPINH against them.

“There could be no possible worse outcome, nothing more catastrophic to the interests of DESA, than the murder of Berta Cáceres,” said Amsterdam. “As this white paper will prove, including in Cáceres’ own words, relations between her and company leadership were cordial and professional, and that they had already moved past this dispute by the time of this tragedy.”

Amsterdam continued: “We join with all other international observers in the demand that justice is served in this case, and that the true culprits are brought to accountability. But the false prosecution of innocent parties on no evidence must not be seen as an acceptable response to this tragedy.”

The White Paper and other documentation is available for download in English and Spanish at https://casocaceres.com. More information about Amsterdam & Partners LLP is available at https://amsterdamandpartners.com.